She earned her doctoral degree in education leadership and higher education administration from Vanderbilt University. Prior to being named chancellor of USC's Palmetto College in 2013, she led Tennessee Technological University's educational outreach and service efforts for over 20 years, serving as Director of Extended Education from 1992-2001. She then served as founding dean of the School of Interdisciplinary Studies and Extended Education in 2002 before being named vice president of Extended Programs and Regional Development in 2006.

After earning a bachelor's degree in elementary education at Tennessee Technological University, Elkins was a middle school math teacher for 10 years before serving as the director of educational programs for the Career Development Center in Cookeville, Tenn. She joined the executive team of Tennessee Tech in 1990 as its interim director of continuing education, at which time she earned her master's degree in education administration from the university.

Susan is a native of Gainesboro, Tenn., and is married to Tommy Elkins. They have one son and daughter-in-law, Andy and Kelly, along with two grandchildren, who live in Louisville, KY.

Fred Varnado, Lieutenant Colonel, US Army (Retired) is a native of Magnolia, Mississippi. He earned a Masters Degree in Personnel Management from Central Michigan University and a Bachelors Degree in Political Science from Alcorn State University. He retired from the US Army in 1995 after successfully commanding the 731st Military Intelligence Battalion in Hawaii. He retired (again!) in January 2015 as Director of The Office of Professional Development and Educational Outreach at The University of Southern Mississippi.

While at the University of Southern Mississippi, Fred served on many committees including: 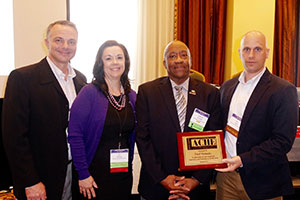 Fred's professional leadership, cooperation, and coordination with ACHE Leadership, University administrators, faculty, staff, and students led to many awards including:

Fred continues to seek opportunities to serve and make positive impacts on the lives of others. Currently, he is the Secretary of the African-American Military History Museum Committee at the Historic East 6th Street USO in Hattiesburg and is serving a 5-year term on the Hattiesburg-Laurel Airport Authority's Board of Commissioners.

She has been involved with the American Society for Engineering Education's Continuing Professional Development Division. She and a colleague, Joe Greenberg, received the award for outstanding publication for their work entitled "Compendium on Uses of Distance Learning Technologies in Engineering Education." She is also the recipient of the division's Joseph S. Biedenbach award. She is a member of the College of Education's Dean's Advisory Council at Purdue University.

Dr. Jill Norburn is the Director of the Rollins Center for Lifelong Learning. She received her doctorate in Educational Leadership, a master's in Higher Education, a bachelor's in Exceptional Education, and a few graduate certificates from the University of Central Florida.

Dr. Norburn started the Rollins Center for Lifelong Learning in September 2013. The goal for the first year was 125 students. After just one year, she has nearly 1500 students! Originally, we were just going to offer 15 classes to seniors in the fall and in the spring. This spring alone, we have over 80 classes for them to choose from! We are even sending our seniors on a study abroad trip to Italy! Dr. Norburn also oversees the certificate programs for people who want to change their career within a year

(such as paralegal, graphic design, and instructional design); the SAT Prep program at Rollins College; and a computer science summer camp for high school students. She is also involved with various on campus committees.

Prior to working at Rollins, she was the Director of Student Affairs at the UCF Burnett honors College. In her spare time she enjoys taking classes, teaching, being actively engaged in the community, and volunteering in the Winnie Palmer NICU. She is a mother to triplet 6 year olds and is a firm believer in lifelong learning.

Meet ACHE South member: Dr. Brian Van Horn. Brian has been an active member of ACHE for 16 years. He served as Chair of ACHE South in 2007-2008 and is currently the ACHE International President.

After attending Southern Illinois University Carbondale (SIUC) for two years, Brian transferred to Murray State University which set the direction for his work in life. He had the honor of serving at MSU in various capacities as a student which included one year as SGA Vice President, two years as SGA President, and two terms on the MSU Board of Regents. It was those life experiences and his desire to help others that led Brian into his current field of University Administration. Brian's love of MSU and continuing education runs deep, and his commitment to the people of Western Kentucky is very important to him.

Brian holds two degrees from MSU (Bachelor's of Science, and Master of Public Administration) and a Doctorate in Leadership and Policy Studies from The University of Memphis. He returned to MSU in 1998 as a Director of the first regional campus (Paducah) and was promoted to Assistant Dean in 2000. In 2008, he was named Interim Dean of Continuing Education and Academic Outreach and was named Dean of CE/AO in July 2009. Under Dr. Van Horn's direction, the various units such as online learning continue to grow and prosper. Since 2007, continuing education enrollments have risen 31%. He was also instrumental in developing an innovative revenue sharing plan for online courses. Online enrollments have increased 120% and online offerings have increased 145% since fall 2007.

Dr. Van Horn has been a regular attendee to ACHE since his first conference in 1998. In 2002 he earned the "Stepping Up to the Plate" ACHE award. He commented on his experience with ACHE: "ACHE has given me so many leadership and educational experiences that have benefitted me personally. It truly is an association where the more you give, the more you receive. Our product is competent professionals that help each other grow professionally!" He is also actively involved in ACHE South, Kentucky ACHE and the ACHE International Board of Directors.

Brian has two children (Will and Ella) and resides in Benton, Kentucky with his wife Dr. Laurel Van Horn. His father and mother still live in Southern Illinois. His father (Mr. Wilbur Van Horn) served in WWII as a member of the United States Navy. In his spare time, he enjoys hunting on his farm in Southern Illinois or traveling to Africa or New Zealand for more exotic game.